(DISCLAIMER: I believe in being 1,000% transparent and open with you. After we filmed this, the next day Dr. Brown and I did a much deeper dive into his numbers and noticed that we needed to improve and work on some aspects that were less favorable than this testimonial video originally mentioned… Which brings me to a very important point… cheap leads don’t mean anything. Conversions are the only thing that matters.

We realized that the number of patients who came in from the ad was much less than what we need to see, so I will be setting a training call with his front office to train them on expectations with Facebook leads, and best practices in increasing the number of scheduled appointments.

Dr. Brown and I will also be scheduling a weekly call moving forward to go over his numbers and issues, and make corrections/additional training as needed to correct these issues sooner, rather than later.

Facebook advertising is not a magic pill, and for the majority of my clients, running ads can sometimes actually expose organizational issues that need to be solved/addressed. That is precisely why only 50% of my time is spent on running ad campaigns, and the other 50% is working on coaching through conversions consulting, and training staff on proper calling/expectations).

When Dr. David Sedghi, DC and I first spoke together, he was 3-4 months away from buying his practice. At the time, his goal was to hit 100-200 visits per week within the next 12 months, and the practice he was buying averaged about 60 visits per week at the time. 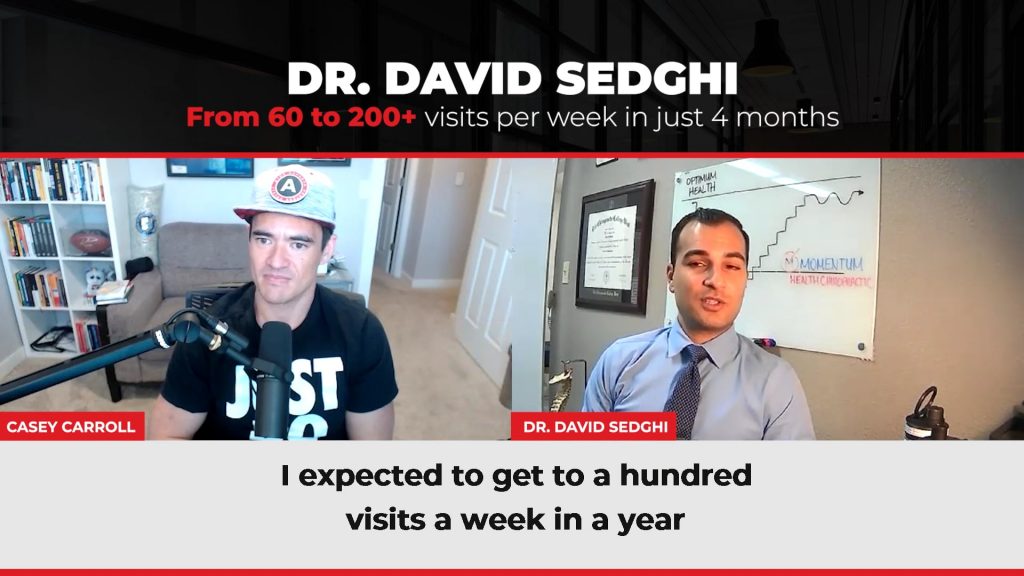 Dr. Ryan Warren with Warren Family Chiropractic had hired 3 other Ad Agencies over the past few years, and no matter which agency he hired, he could never get past 250 to 300 visits per week. 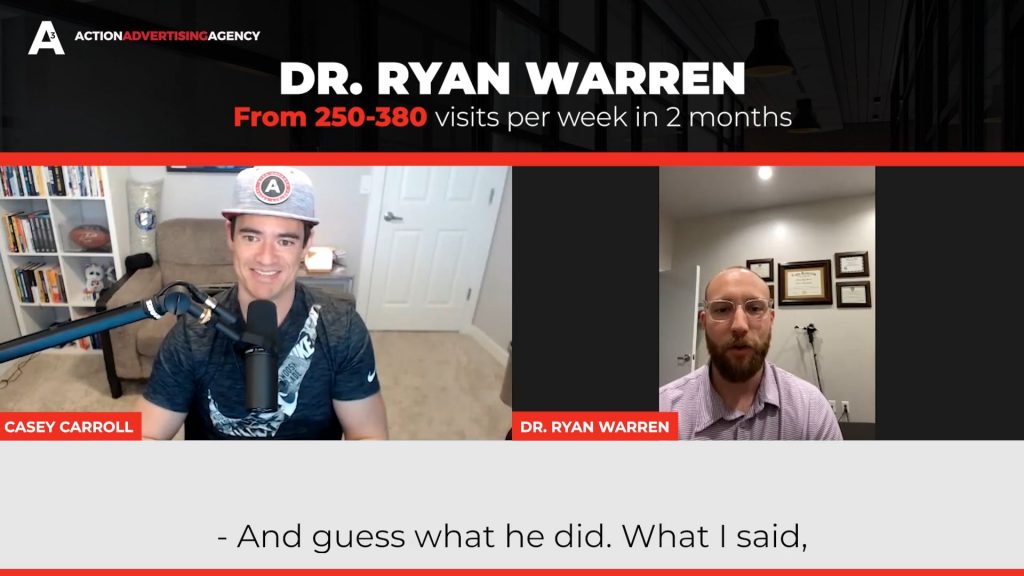 Here's What Our Happy Clients Say About Us

"We've worked with a different bigger dental advertising company and ran Facebook ads with them, and the way you advertise is like a night and day difference. After we started working with you, a lot of your leads were showing up and actually coming into the office... and that has definitely made a big difference on the bottom line."

Dr. Ben BowlesBowles Family Chiropractic
"We were seeing under 300 patient visits per week before we started working with you. Less than 7 months later, we're now seeing 500+ per week - and the only thing we did differently is running ads through you. The only reason you would not want to work with [Casey] is if you've made it in life..."

Dr. Tim YoderYoder Chiropractic Center
"The best new patient month we've ever had was 50 new patients, which was just the month before we started with you. Last month, once we started working with you on Facebook ads, we ended up with 92 new patients! This month we're 3 weeks in and we're already at 65-70 new patients already."

Dr. Michael ParkerAmarillo South Chiropractic
"I was hoping to get just a few more patients slowly tricking in. Well, we had actually got 30 patients in 3 days!"

30 Minute Strategy Session - we will take a deep dive into your business to see if we are a good fit for each other. If we have extra time during the call, I will show you some live ad accounts and strategies I use to help other businesses within your same niche.

The team at A3 is obsessed with one thing: creating an insane amount of ROI for our clients.
Facebook-f Linkedin-in